Christine and Margaret Wertheim: Value and Transformation of Corals (Hardcover) 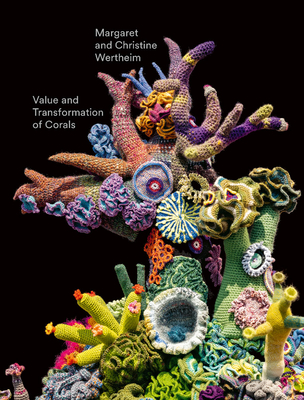 Australian-born, California-based sister artists Margaret and Christine Wertheim draw on a unique fusion of mathematics, marine biology, traditional handicraft methods and collective art practice to create large-scale coralline landscapes both beautiful and blighted. Responding to anthropogenic crisis, their soft sculptures and wall-mounted reliefs simulate living reefs using crochet techniques to mimic in yarn the curling, crenelated forms of actual marine organisms. Initiated in 2005, the Crochet Coral Reef project has been exhibited at the 58th Venice Biennale, Helsinki Biennial, Andy Warhol Museum, The Smithsonian Institution and other international venues. In addition to their own reefs, the Wertheims have collaborated with communities in 50 cities and countries to create local Satellite Reefs, to which more than 20,000 people have contributed, constituting one of the largest, longest running participatory art happenings on the planet.

This publication accompanies a museum-wide retrospective at Museum Frieder Burda in Baden-Baden, Germany, which gathers the Wertheims' work over the past 17 years alongside a new Baden-Baden Satellite Reef, the largest to date, encompassing over 40,000 individual coral pieces. With commissioned essays about the scientific, social, environmental, mathematical and communal dimensions of the project, the book provides a critical in-depth look at a stunning example of the power of art and community in the face of climate change. Collaborative, figurative, material, conceptual, artistic, feminist and playful, the Wertheims' Crochet Coral Reef alerts us to the reality that life on Earth is nothing if not entangled.