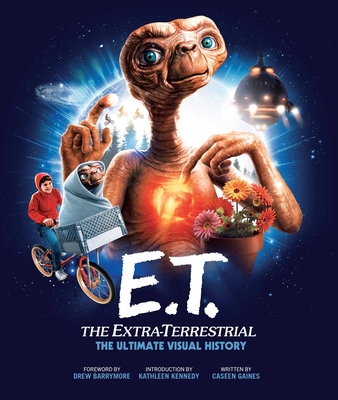 The definitive account of the motion picture phenomenon, E.T. the Extra-Terrestrial: The Ultimate Visual History is a must-have for fans of the beloved Steven Spielberg classic.

Documenting the complete history of E.T., the book explores Spielberg’s initial inspiration for the story, the challenging shoot, and the record-breaking success, as well as the film’s endurance, examining the merchandising it inspired and the reasons E.T. holds a permanent place in the hearts of movie fans the world over.

E.T. the Extra-Terrestrial: The Ultimate Visual History features exclusive interviews with key members of the creative team, including cast and crew. Filled with visual treasures, the book also includes rare and never-before-seen imagery from the Amblin Entertainment archives, including on-set photography, concept art, and storyboards, plus a wealth of removable insert items, such as annotated script pages, studio memos,  preliminary sketches, and more. The perfect tribute to a film that defines movie magic, E.T. the Extra-Terrestrial: The Ultimate Visual History is the final word on a modern masterpiece.

Caseen Gaines is a popular culture historian whose work has been published at Vanity Fair, Rolling Stone, The A.V. Club and Decider. He is the author of several nonfiction books including We Don't Need Roads: The Making of the Back to the Future Trilogy, A Christmas Story: Behind the Scenes of a Holiday Classic, and Inside Pee-wee's Playhouse, which won a Silver Medal at the 2012 Independent Publisher Book Awards. He can be found on social media @caseengaines.