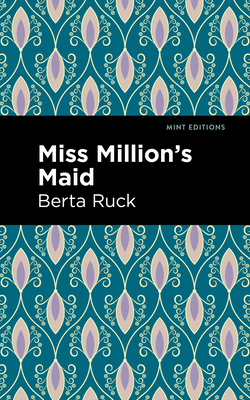 Miss Million's Maid (1913) is a romance novel by Berta Ruck. After a decade of publishing stories in literary magazines, Ruck began releasing romance novels to popular acclaim. Miss Million's Maid is a satirical tale of love, work, and modern life that continues to entertain over a century after it was written. Beatrice Lovelace longs for a social life. Although she was born into a family of London elites, her family's fortunes turned to leave Beatrice with next to nothing. Living with her frugal Aunt Anastasia, she hears secondhand of events around town she has no opportunity to see for herself. Her only friend, if she could be called such, is her loyal maid Nellie Million, whose name takes on a brand-new meaning when a distant uncle unexpectedly leaves her a massive fortune. Sensing an opportunity, Beatrice volunteers to work as her maid, making something of herself for the first time in her life. Despite their cordiality and good rapport, the two women soon succumb to the pressures of life in a class they had never experienced. Juggling work and wealth, navigating the ways of men, Nellie and Beatrice learn that money and happiness often refuse to mix. Miss Million's Maid is a comedy of social life, a story of romance and friendship from one of the twentieth century's most prolific authors. With a beautifully designed cover and professionally typeset manuscript, this edition of Berta Ruck's Miss Million's Maid is a classic of British romance literature reimagined for modern readers.