Shaping the Surface: Materiality and the History of British Architecture 1840-2000 (Hardcover) 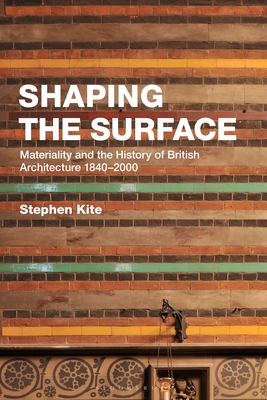 Shaping the Surface explores the history of modern British architecture through the lens of surface, materiality and decoration.

Picking up on a trait that art historian Nikolaus Pevsner first identified as a 'national mania for beautiful surface quality', this book makes a new contribution to architectural history and visual culture in its detailed examination of the surfaces of British architecture from the middle of the 19th century up to the turn of the 21st century. Tracing this continuing sensibility to surface all the way through to the modern era, it explores how and why surface and materiality have featured so heavily in recent architectural tradition, examining the history of British architecture through a selection of key cultural moments and movements from Romanticism and the Arts and Crafts, to Brutalism, High-Tech, Post-Modernism, Neo-Vernacular, and the New Materiality. Embedded within the narrative is the question of whether such national characters can exist in architecture at all - and indeed the extent to which it is possible to identify a British architectural consciousness in an architectural tradition characterised by its continuous importation of theories, ideas, materials and people from around the globe. Shaping the Surface provides a deep critique and meditation on the importance of surface and materiality for architects, designers, and historians everywhere - in Britain and beyond - while it also serves as a thematic introduction to modern British architectural history, with in-depth readings of the works of many key British architects, artists, and critics from Ruskin and William Morris to Alison and Peter Smithson, Eduardo Paolozzi, Richard Rogers and Caruso St John.

Stephen Kite is Emeritus Professor at the Welsh School of Architecture, Cardiff University, Wales, UK. His previous books include Shadow-Makers: A Cultural History of Shadows in Architecture (Bloomsbury, 2017).