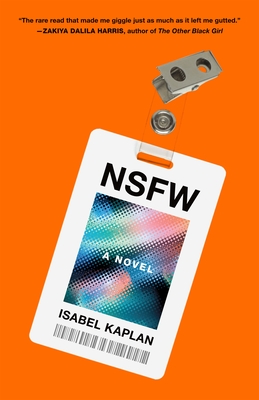 I wasn't quite sure what to expect when I picked this up, but it was an absolute treat. Kaplan's debut is sharply written, funny, and her take on #Metoo issues is nuanced and thoughtful. The narrator's mother is splendidly awful.

NATIONAL BESTSELLER • SHORTLISTED FOR THE CENTER FOR FICTION'S FIRST NOVEL PRIZE • “An intoxicating exploration of male-dominated workplaces . . . NSFW is gripping, with a lot to unpack, making it excellent book-club fodder.”—TIME

Named an Amazon "Best Book of 2022" for Literature and Fiction

Blisteringly sharp and hypersmart—meet Isabel Kaplan’s searing debut novel about a young woman trying to succeed in Hollywood without selling her soul.

From the outside, the unnamed protagonist in NSFW appears to be the vision of success. She has landed an entry-level position at a leading TV network that thousands of college grads would kill for. And sure, she has much to learn. The daughter of a prominent feminist attorney, she grew up outside the industry. But she’s resourceful and hardworking. What could go wrong?

At first, the high adrenaline work environment motivates her. Yet as she climbs the ranks, she confronts the reality of creating change from the inside. Her points only get attention when echoed by male colleagues; she hears whispers of abuse and sexual misconduct. Her mother says to keep her head down until she’s the one in charge—a scenario that seems idealistic at best, morally questionable at worst. When her personal and professional lives collide, threatening both the network and her future, she must decide what to protect: the career she’s given everything for or the empowered woman she claims to be.

Fusing page-turning prose with dark humor and riveting commentary on the truths of starting out professionally, Isabel Kaplan’s NSFW is an unflinching exploration of the gray area between empowerment and complicity. The result is a stunning portrait of what success costs in today’s patriarchal world, asking us: Is it ever worth it?

Isabel Kaplan graduated from Harvard and holds an MFA in creative writing from NYU. She is the author of the national bestselling young adult novel Hancock Park and was born and raised in Los Angeles.

Named one of Debutiful's "Best Debut Books of 2022

“Ambition bites back in NSFW . . . So visceral . . . NSFW makes your brain spin on the #MeToo merry-go-round that’s come derailed from the base and spontaneously set on fire. Bleak and brave, this novel is a reminder of how skewered women are, no matter ‘how far we’ve come.’”
—The New York Times

"Haunting and hilarious in equal measure . . . This sharp, unflinching novel takes a magnifying glass to the cognitive dissonance required by women who dare to exist—or even succeed—in a male-dominated world. The rich nuances of the narrator's personal and professional life in Hollywood, which blur together with every page, are as farcical as they are strikingly realistic. A must-read."
—BuzzFeed

“A wholly engrossing and shrewdly observational novel that puts the transactional nature of relationships—both professional and personal—on full blast. NSFW is the rare kind of read that made me giggle just as much as it left me gutted.”
—Zakiya Dalila Harris, New York Times bestselling author of The Other Black Girl

“I devoured NSFW. The complexities of who we are, what we stand for, and what we hope we stand for—plus the ramifications of all the choices we make—are beautifully explored. I learned from this novel and I am grateful for it.”
—Jamie Lee Curtis

“A frank account of leaning in and its inherent filthiness. Kaplan captures the psychological and, at times, literal gymnastics required of striving women.”
—Raven Leilani, New York Times bestselling author of Luster

“Kaplan peels back the curtain to examine the culture of a television network in this sharply observed, completely absorbing debut novel . . . Kaplan’s authentic insider knowledge makes her piercing first outing a cut above the plethora of Hollywood-set novels.”
—Booklist

“With tons of dark humor . . . This is a novel that captures the contemporary moment of work culture and more.”
—Book Riot

“Frank, funny, and unputdownable, Isabel Kaplan's NSFW takes you on an ambitious young woman's wild ride through Hollywood. Her mother's a famous feminist lawyer, and she's a rising executive star, mistress of her destiny. But behind the glitter and the justice, everyone is tarnished and compromised including even our narrator. Kaplan, with her sharp and nuanced eye, sees it all, and tells it brilliantly.”
—Claire Messud, New York Times bestselling author of The Burning Girl and The Woman Upstairs

“Isabel Kaplan is as sharp-eyed and witty as they come. NSFW is a great, hilarious romp in the grand tradition of Hollywood novelists like Carrie Fisher and Bruce Wagner. Delicious and naughty and adorably bleak, much like L.A. itself.”
—Elisa Albert, author of Human Blues

“Brilliantly deadpan and spiky in all the right ways . . . An accurate, darkly funny but also brutal portrayal of everyday workplace and world power dynamics. I couldn’t put it down!”
—Emily Itami, author of Fault Lines

“I inhaled this deliciously sharp, ridiculously funny, and surprisingly heartfelt debut. NSFW is many things: a canny portrait of mother-daughter codependency, an incisive look at pre Me-Too era Hollywood dynamics, and a nuanced portrait of one young woman's quest for self-knowledge. The only time I willingly took a break from reading was to text various friends about how much they're going to love this book. I cannot wait to discuss it with everyone I know.”
—Coco Mellors, author of Cleopatra and Frankenstein