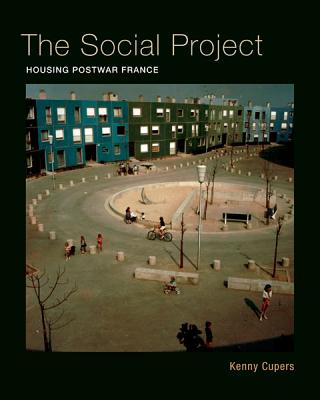 By Kenny Cupers
This title is not presently available through this site.

In the three decades following World War II, the French government engaged in one of the twentieth century’s greatest social and architectural experiments: transforming a mostly rural country into a modernized urban nation. Through the state-sanctioned construction of mass housing and development of towns on the outskirts of existing cities, a new world materialized where sixty years ago little more than cabbage and cottages existed.

Known as the banlieue, the suburban landscapes that make up much of contemporary France are near-opposites of the historic cities they surround. Although these postwar environments of towers, slabs, and megastructures are often seen as a single utopian blueprint gone awry, Kenny Cupers demonstrates that their construction was instead driven by the intense aspirations and anxieties of a broad range of people. Narrating the complex interactions between architects, planners, policy makers, inhabitants, and social scientists, he shows how postwar dwelling was caught between the purview of the welfare state and the rise of mass consumerism.

The Social Project unearths three decades of architectural and social experiments centered on the dwelling environment as it became an object of modernization, an everyday site of citizen participation, and a domain of social scientific expertise. Beyond state intervention, it was this new regime of knowledge production that made postwar modernism mainstream. The first comprehensive history of these wide-ranging urban projects, this book reveals how housing in postwar France shaped both contemporary urbanity and modern architecture.

Kenny Cupers is assistant professor of architectural history at the University of Illinois at Urbana-Champaign. He is coauthor of Spaces of Uncertainty and editor of Use Matters: An Alternative History of Architecture.

"A tour de force on the French suburbs and the utopian imaginaries that made them into the twentieth century's largest social experiment. The Social Project is a must-read for anyone interested in the ‘other Paris’ of the suburban periphery and a brilliant contribution to the urban and architectural history of the French suburbs and to understanding the social ambitions of architecture."—Rosemary Wakeman, Fordham University

"The Social Project does important work in uncovering and making available the complex projects, motives, dreams, and politics that made possible the vast expansion of urbanism in postwar France. It reminds us with force and insight that today’s despair and gloominess about such projects was not always the case nor were the current dreary outcomes inevitable."—Paul Rabinow, University of California, Berkeley

"A thorough history of the development of post-World War II mass housing in France."—The Culture Machine