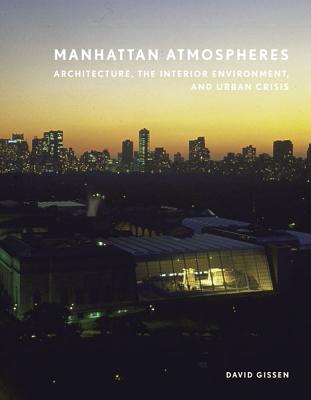 By David Gissen
This title is not presently available through this site.

During Manhattan’s crisis years between the 1960s and early 1980s, the city’s great park networks, sanitarian projects of light, air, and water, and its monumental public works were falling apart. Images of flooded streets, blackened air, collapsed highways, and burning buildings characterize our understanding of the city’s landscape throughout this period. At the same time, architects reimagined interior spaces as a response to these urban disasters. David Gissen reveals that a new chapter in New York’s environmental history was unfolding inside the city’s gleaming late-modern architecture.

In Manhattan Atmospheres, Gissen uncovers an alternative environmental history by examining the megastructural apartments, verdant corporate atria, enormous trading rooms, and mammoth museum galleries that were built in this era. These environments were integral to New York City’s restructuring and also some of the most politicized fabrications of nature found in the city. Behind the tinted and mirrored glass, the vaporous cooled and warmed atmospheres offered protection from pollution, stewarded urban greenery, and helped preserve precious cultural artifacts. But, entangled with efforts to gentrify neighborhoods, the new settings served as a stage for demographic transformations and shifts in cultural concentration and enriched the overall corporatization of the city.

Caught in politicized debates, these spaces were far from simple solutions to the city’s dilemmas. Making a significant contribution to postwar architectural history, critical geography, and urban studies, Gissen deftly demonstrates how these sealed environments were not closed off conceptually from the surrounding city but instead were key sites of environmental production and, in turn, a new type of socionatural form.

David Gissen is associate professor of architecture, visual studies, and visual and critical studies at the California College of the Arts, San Francisco. He is the author of Subnature: Architecture’s Other Environments.

"Drawing on the theoretical concepts of assemblages and socio-natures, David Gissen uses a number of important case studies to reflect transformations in New York City’s urban environment, focusing squarely on shifts in power during the city’s post-industrial context. By mixing architecture with geography, his keen eye makes a convincing, innovative argument about the importance of ‘maintenance.’" —Julie Sze, author of Noxious New York: The Racial Politics of Urban Health and Environmental Justice