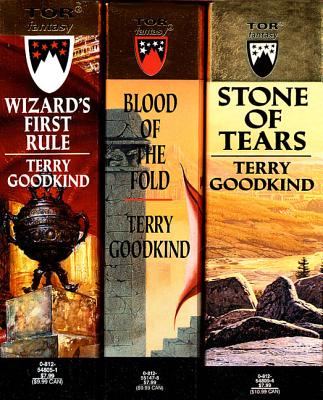 The masterpiece from Terry Goodkind that started the New York Times bestselling epic Sword of Truth. This boxed set includes the first three books: Wizard's First Rule, Stone of Tears, and Blood of the Fold

In the aftermath of the brutal murder of his father, a mysterious woman, Kahlan Amnell, appears in Richard Cypher's forest sanctuary seeking help. Richard’s world, his very beliefs, are shattered when ancient debts come due with thundering violence.

This is the beginning. One book. One Rule. Witness the birth of a legend.

Kahlan has at last gained the one goal she had always thought was beyond her grasp ... love. Against all odds, the ancient bonds of secret oaths, and the dark talents of men long dead, Richard has won her heart.

Amid sudden and disastrous events, Richard's life is called due to satisfy those treacherous oaths. To save his life, Kahlan must forsake Richard's love and cast him into the chains of slavery, knowing there could be no sin worse than such a betrayal.

Book 3: Blood of the Fold

In a world as rich and real as our own, Richard Rahl and Kahlan Amnell stand against the ancient forces which besiege the New World--forces so terrible that when last they threatened, they could only be withstood by sealing off the Old World from whence they came. Now the barrier has been breached, and the New World is again beset by their evil power.

Terry Goodkind (1948-2020) is a #1 New York Times bestselling author. His books include the multi-volume epic fantasy Sword of Truth series -- beginning with Wizard’s First Rule, the basis for the television show Legend of the Seeker -- and related series Richard and Kahlan and The Nicci Chronicles.

Goodkind was born and raised in Omaha, Nebraska, where he also attended art school. Alongside a career in wildlife art, he was also a cabinetmaker and a violin maker, and did restoration work on rare and exotic artifacts from around the world. In the 1990s he relocated to Nevada, where, when not writing novels, he was a racing-car enthusiast.