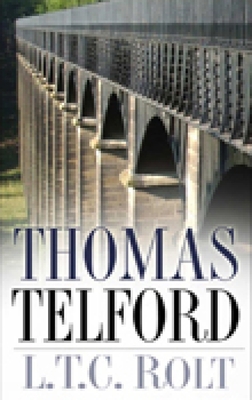 The son of a shepherd, Thomas Telford was born in Westerkirk, Scotland in 1757. At the age of 14, he was apprenticed to a stonemason. He worked for a time in Edinburgh and in 1782 he moved to London. By this time, Telford had established a good reputation as an engineer and in 1790 was given the task of building a bridge over the River Severn at Montford. This was followed by a canal that linked the ironworks and collieries of Wrexham with Chester and Shrewsbury. On the Pontcysyllte Aqueduct, Telford used a new method of construction consisting of troughs made from cast-iron plates and fixed in masonry. With the success of these structures, Telford began his rise to fame that eventually made him one of the greatest engineers in Victorian Britain. His bridges, aqueducts, roads, and canals combined aesthetic grace with brilliant engineering, and perhaps no other single individual contributed more to making Britain the "workshop of the world."

L.T.C. Rolt is the author of biographies on several great British engineers, including Brunel and the Stephensons, as well as Narrow Boat.

"Mr. Rolt at the full height of his powers  . . . animates the scene with life just as though some old print started out of its pages."  —John Betjeman

"Mr. Rolt writes faithfully and thoroughly of Telford's work and achievements. He brings to their interpretation the outlook of an engineer."  —Sunday Times

"Mr. Rolt realizes from the start that what makes Telford important is what he did, not what he was . . . an original writer on fresh themes; he knows his subject inside out."  —Times Literary Supplement