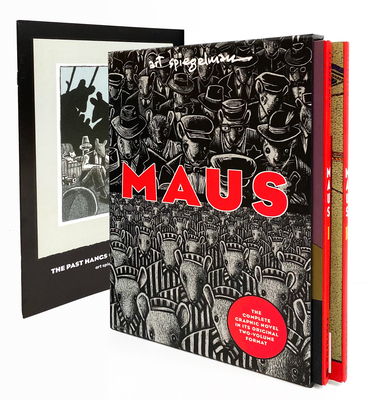 Here is the paper back boxed set, in its original two-volume format, re-released to include a sixteen-page booklet designed by the artist.

A brutally moving work of art—widely hailed as the greatest graphic novel ever written—Maus recounts the chilling experiences of the author’s father during the Holocaust, with Jews drawn as wide-eyed mice and Nazis as menacing cats.

Maus is a haunting tale within a tale, weaving the author’s account of his tortured relationship with his aging father into an astonishing retelling of one of history's most unspeakable tragedies. It is an unforgettable story of survival and a disarming look at the legacy of trauma.

ART SPIEGELMAN is one of the world’s most admired and beloved comic artists, best known for his Pulitzer Prize-winning Holocaust narrative, Maus. Born in Stockholm in 1948, Spiegelman began studying cartooning in high school and drawing professionally at age sixteen. He studied art and philosophy at Harpur College before joining the underground comics movement in the 1960s. Spiegelman taught history and the aesthetics of comics at the School of Visual Arts in New York from 1979 to 1986, and in 1980 he founded RAW, the acclaimed avant-garde comics magazine, with his wife, Françoise Mouly. Honors Spiegelman has received include induction into the Will Eisner Hall of Fame and the Art Director’s Club Hall of Fame. In 2005, he was named one of Time magazine’s 100 Most Influential People. He was made an Officier de l’Ordre des Arts et des Lettres in 2007, and in 2011 he was awarded the Grand Prix at the Angoulême International Comics Festival. In 2015, he was elected to the American Academy of Arts and Letters, and in 2018 he became the first comic artist to receive the Edward MacDowell Medal. His art has been exhibited at museums throughout the world, including the Pompidou Center in Paris, the Ludwig Museum in Cologne, the Vancouver Art Gallery, the Jewish Museum in New York City, and the Los Angeles Museum of Contemporary Art.

“The most affecting and successful narrative ever done about the Holocaust.”
—The Wall Street Journal

"The first masterpiece in comic book history.”
—The New Yorker

“A loving documentary and brutal fable, a mix of compassion and stoicism [that] sums up the experience of the Holocaust with as much power and as little pretension as any other work I can think of.”
—The New Republic

“A quiet triumph, moving and simple—impossible to describe accurately, and impossible to achieve in any medium but comics.”
—The Washington Post

“Spiegelman has turned the exuberant fantasy of comics inside out by giving us the most incredible fantasy in comics’ history: something that actually occurred . . . The central relationship is not that of cat and mouse, but that of Art and Vladek. Maus is terrifying not for its brutality, but for its tenderness and guilt.”
—The New Yorker

“All too infrequently, a book comes along that’s as daring as it is acclaimed. Art Spiegelman’s Maus is just such a book.”
—Esquire

“A remarkable work, awesome in its conception and execution . . . at one and the same time a novel, a documentary, a memoir, and a comic book. Brilliant, just brilliant.”
—Jules Feffer