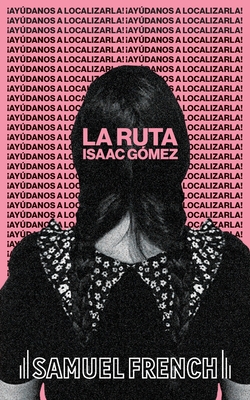 By Isaac Gómez
This title is not presently available through this site.

To the U.S.-owned factories in Ciudad Ju rez, Mexico, La Ruta is just a bus. But to the hundreds of women who live, work and often disappear along the route, it's so much more than that. Inspired by real testimonies, and using live music to evoke factory work and protest marches, La Ruta is a visceral unearthing of secrets buried in the desert and a celebration of the Mexican women who stand resiliently in the wake of loss.

"Haunting, harrowing... crescendos from a quiet whimper to an anguished cri de coeur. It's difficult to watch but] impossible to look away." - Daily Herald

"Filled with fraught, intensely emotional scenes. Despite being set in the past, La Ruta has plenty of contemporary relevance." - Chicago Sun-Times

"Unrelenting tension animates the haunting, harrowing La Ruta, which crescendos from a quiet whimper to an anguished cri de coeur. It's difficult to watch but] impossible to look away." - Daily Herald

"Talented 27-year-old writer's new drama with music... tells of the women of Juarez, murdered on their way to work. G mez] fulfilled his promise. He honors them with every word. Alive or dead, you feel them in the bones of this young play." - Chicago Tribune

"Countless moments of sheer theatrical beauty.... With La Ruta, a play inspired by the true stories of the women of Ju rez, G mez has crafted an act of storytelling whose primary function is as noble as any act of pure human inspiration one can find in the theater: keeping these women and their daughters alive." - Newcity

"Bold, beautiful and timely piece of art... La Ruta triumphs... an unmitigated dramatic victory. The setting may be Ciudad Juarez, Mexico, but the struggles of these poor, strong, beautiful women are universal. La Ruta is a must-see." - Broadway World