Champions of Illusion: The Science Behind Mind-Boggling Images and Mystifying Brain Puzzles (Hardcover) 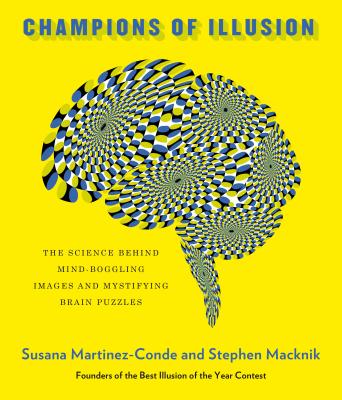 By Susana Martinez-Conde, Stephen Macknik
$29.90
Email or call for price.

In Champions of Illusion, Susana Martinez-Conde and Stephen Macknik present a smorgasbord of mystifying images, many selected from their Best Illusion of the Year Contest. Whether it’s false motion, tricks of perspective, or shifting colors, Champions of Illusion is packed with adventures in visual perception. If you have ever found yourself face-to-face with an utterly bewildering illusion, you know the powerful effect such images have on the mind. The question we often ask ourselves is, How is that possible? Martinez-Conde and Macknik, who study the intersection of neuroscience, illusions, and stage magic, explain just why we think we see the things we see.

The Best Illusion of the Year Contest draws entries from vision scientists, artists, magicians, and mathematicians bent on creating today’s most beguiling illusions. Featuring the contest’s most bizarre effects and unbelievable mind tricks, along with classic illusions and illuminating descriptions of what is actually going on in your brain when you are deceived by visuals on the page, Champions of Illusion is an electrifying mix of science and magic that you will not soon forget.

Susana Martinez-Conde, Ph.D., is Director of the Laboratory of Visual Neuroscience at Barrow Neurological Institute. She is co-author of Sleights of Mind: What the Neuroscience of Magic Reveals about Our Everyday Deceptions.

Stephen L. Macknik, Ph.D., is Director of the Laboratory of Behavioral Neurophysiology at the Barrow Neurological Institute in Phoenix, Arizona. He is co-author of Sleights of Mind.

Longlisted for the AAAS/Subaru Prize

“Champions of Illusion by Martinez-Conde and Macknik belongs on the shelf of every researcher, experimental or theoretical, who seeks to discover and understand the fascinating phenomena of visual perception and the neuronal mechanisms underlying them. Psychologists, artists, neuroscientists, and others will be captivated by this book. It is warmly recommended to students who wish to enhance their knowledge of the magical and unexplained visual world. Curious lay persons will also benefit from this unusually lucid, persuasive, and admirably crafted tome.” —Perception

"Delightful, addictive, shareable—and an invaluable window on the functioning of the human brain." —Steven Pinker, Johnstone Professor of Psychology at Harvard University and bestselling author of How the Mind Works and The Better Angels of Our Nature

"Susana Martinez-Conde and Stephen Macknik are explorers of the cognitive wonderland. This collection of brain games and perceptual artifice showcases the gaps in our maps of reality." —Apollo Robbins, performer and world’s leading expert on deception and pickpockets

"Few books can blow your mind on every page. This is one of those books. If you’ve ever thought you’re seeing the world as it really is, get ready to think again." —David Eagleman, neuroscientist at Stanford University and bestselling author of Incognito and Sum

"As a magician, I’ve always been fascinated by illusions. This beautiful book not only collects many new and innovative illusions, it also has straightforward explanations for why they work that even a non-neurologist like me can understand." —Mac King, champion of comedy magic and headliner at Harrah’s Las Vegas

"A fabulous book. Every illusion is a mind-bending experience and every explanation is riveting. I could not put this book down." —Michael Gazzaniga, director of the SAGE Center for the Study of the Mind at the University of California, Santa Barbara, and author of Tales from Both Sides of the Brain

"Seeing is believing . . . even when it shouldn’t be! This fascinating and delightful book shows how the eye and brain conspire to make use what isn’t so." —Daniel Gilbert, Edgar Pierce Professor of Psychology at Harvard University and bestselling author of Stumbling on Happiness

"Prepare to be amazed by your own brain! Champions of Illusion is a fun-filled journey through the amazing way your visual system works described expertly by Susana Martinez-Conde and Stephen Macknik." —Wendy Suzuki, Professor of Neural Science and Psychology at New York University and author of Healthy Brain, Happy Life

"In this beautiful book, Susana Martinez-Conde and Stephen Macknik compile some of the most surprising, compelling, and elegant visual illusions of the new millennium and explain how and why they work. You’ll be amazed." —Daniel Simons, professor of psychology at the University of Illinois and bestselling coauthor of The Invisible Gorilla

"Visual illusions flummox us. They mystify, confuse, baffle, bewilder, perplex, stump, and confound. They do so because they contain in them our evolutionary tracks and the way we view our physical world today. This collection by Susana Martinez-Conde and Stephen Macknik represents the best of a yearly competition to discover the most impressive visual illusions that the best minds among us can create. In giving us this compendium, Martinez-Conde and Macknik bring us face-to-face with our evolutionary history and our aspirations for who we might be. A feast for your eyes!" —Mahzarin R. Banaji, Richard Clarke Cabot Professor of Social Ethics at Harvard University and coauthor of Blindspot

"Illusions are a window into how the brain generates our perceptions. Nowhere is this better illustrated and explained than in Champions of Illusion. Highly recommended!" —Earl Miller, Picower Professor of Neuroscience at the Massachusetts Institute of Technology

"Visual illusions are perpetually entertaining, but they are not merely amusing curiosities; they have profound implications for understanding the mechanisms underlying normal human vision. Our perception of the world, despite its appearance of coherence, stability, and authenticity, is in fact evanescent and transitory, and Susana Martinez-Conde and Stephen Macknik—two leaders in the field—use cleverly contrived illusions to make the point." —V. S. Ramachandran, Director of the Center for Brain and Cognition at the University of California, San Diego, and bestselling author of Phantoms in the Brain and coauthor of The Tell-Tale Brain