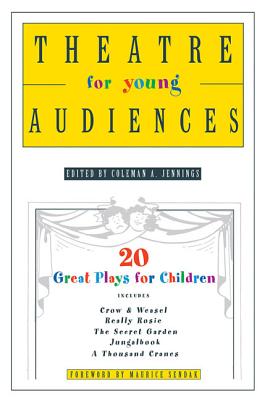 By Coleman A. Jennings (Editor), Maurice Sendak (Foreword by)
This title is not presently available through this site.

Presented with the right plays, children are the most honest and appreciative of audiences. This anthology, compiled by an authority on children's theatre, collects new and overlooked scripts that represent the best of modern playwriting for children. From works adapted from classic children's stories to original contemporary scripts, each play inspires the imagination as it entertains.

With complete scripts for twenty plays plus a biographical sketch of each playwright, Theatre for Young Audiences is invaluable for anyone involved in children's theatre, from community theatre groups to teachers and students of dramatic literature.

Plays included in this book:

Coleman A. Jennings, professor of Creative Drama/Children's Theatre at the University of Texas at Austin, is the author of three plays for children and editor of four anthologies, including Plays Children Love, volumes I and II. In 1997 he received a Lifetime Achievement award from the American Alliance for Theatre and Education.

Maurice Sendak (1928-2012) was the author and illustrator of such classic children's books as Where the Wild Things Are and In the Night Kitchen. Widely considered one of the most innovative creators of children's literature, he received honors including the Caldecott Medal, the Hans Christian Andersen Medal, the Laura Ingalls Wilder Award, and the National Medal of Arts. Sendak was born in Brooklyn in 1928 and died in Connecticut in 2012.

“I am inclined to trust children with the truth, and allow them to draw their own conclusions. Not to tell them what to think--but to require them to think.” —Sara Spencer, publisher of the Children's Theatre Press

“I am only ten years old but I know a good play when I see one.” —Charles W.