The Duchess of Malfi, The White Devil, The Broken Heart and 'Tis Pity She's a Whore (Paperback) 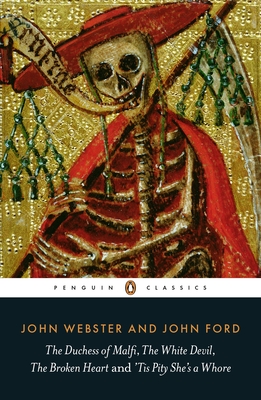 These four plays, written during the reigns of James I and Charles I, took revenge tragedy in dark and ambiguous new directions. In The Duchess of Malfi and The White Devil, John Webster explores power, sex, and corruption in the Italian court, creating two unforgettable anti-heroines. In The Broken Heart, John Ford questions the value of emotional repression as his characters attempt to subdue their desires and hatreds in ancient Greece. Finally, Ford's masterpiece 'Tis Pity She's a Whore explores the taboo themes of incest and forbidden love in a daring reworking of Romeo and Juliet.

For more than sixty-five years, Penguin has been the leading publisher of classic literature in the English-speaking world. With more than 1,500 titles, Penguin Classics represents a global bookshelf of the best works throughout history and across genres and disciplines. Readers trust the series to provide authoritative texts enhanced by introductions and notes by distinguished scholars and contemporary authors, as well as up-to-date translations by award-winning translators.

JOHN WEBSTER was born in about 1578 in London. He studied law at the Middle Temple before embarking on a career in the theater, collaborating on many plays with contemporary dramatists. But it was his two solo-authored tragedies, The White Devil (1612) and The Duchess of Malfi (1614), that sealed his reputation. He died in the 1630s.

JOHN FORD was born in 1586 in Devon, England. His early career was wholly concerned with poetry and philosophical works, and it was not until the 1620s that he began writing stage plays, including The Broken Heart (1620) and'Tis Pity She's a Whore (c.1630). Nothing more is known of Ford after the performance of his last play in 1638.

JANE KINGSLEY-SMITH (editor) is a reader at Roehampton University, London, and author of Shakespeare's Drama of Exile and Cupid in Early Modern Literature and Culture.